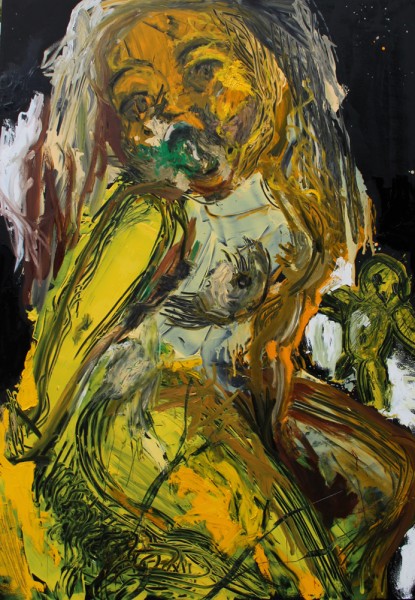 Argentine artist Astrid Dick, now working in Paris, has undergone a startling and beautiful metamorphosis in recent years.  Ten years ago she was an outstanding member of the cohort of economists who trained (with me) at MIT during the 1990s and who were collectively pushing forward our understanding of financial institutions and financial markets.  Her work zeroed in on the industrial organization of financial markets, and in her research she used highly refined econometric tools to tease out a better understanding of how financial firms such as banks compete with each other.

But after serving as an economist on the staff of the Federal Reserve Bank of New York and as a faculty member at INSEAD business school in Paris, Astrid left the life of an economist behind and transitioned entirely to the production of art – painting, drawing, sculpture and video – that is passionately executed and fully in conversation with the great artists in history.

Painting represents much of her artistic production.  This work bursts with emotion and is frequently executed on a scale that creates an extremely powerful effect on the viewer.  She exhibited works as part of the Authentik Energie exhibition at the Manoir de la Ville de Martigny in Switzerland during the spring of 2014; the photographs of her paintings at that exhibition give a sense of the magnitude of her work and its vivid emotional expression.

Her video work is equally interesting, and I want to focus for a bit on her short film “Brunhilde and Siegfried: a love affair in seven acts.”  This film weaves together her artwork, music, and performance in a way that has a mesmerizing effect.   The seven acts of this film: Kiss, Idyll, Duty, Weakness, Longing, Revenge, and Burial of the Dead, tell a story of longing, loss, entrapment, artistic frustration, the commercialization of artistic production, violence and peace.  I encourage you to watch this short film – if you watch with an open spirit, then I guarantee that you will emerge changed.

The Waltham Review had the opportunity to interview Astrid about her work, her art, and her life.  Below are our questions and Astrid’s answers:

WR: Your time in academia was extremely productive. But now that you have transitioned to your current life, do you now regret the time that you spent working as an economist?  Was the time wasted or was it valuable?

I used to regret it, when I started painting full-time.  But I don’t any more.  When I started painting, I was in such haste that I kept asking myself what the hell I had done with my whole life.  Yet today I feel that it was all necessary, and that my past in economics has given me so much that I can use as an artist.  I think having done research has helped me to face the empty canvas! To add structure when needed, to keep cooler and persevere during those moments when nothing seems to work, or when ideas run out.  To take better advantage of accidents, and to keep notes of stuff that doesn’t seem to lead anywhere!

When I was twenty I was infatuated with mathematics and the social sciences – the beautiful mix that economics offers.  I think that I had to get that out of my system.  But at some point I felt that I wanted to express things beyond the intellectual work of an economist, a medium that would allow me to use all of me, my soul included.

WR: How was that transition from economics to art?

It was something that took time, growing out of the old skin and developing the new one.  For a long time I carried on a double life, between art and economics.  But at some point it became obvious.  It was art or die!  I would wake up in the morning and feel that all I wanted to do was paint.  I couldn’t wait until the evening to be free.  I wanted to use the best hours of my day, my best energy, for art.

The hard part in the transition was actually the others.  Colleagues, friends, family.  It was the ones who were closest to me who were usually the most adamant against my change.   There were sometimes harsh words.  I guess we are like cats, afraid of change.   Our whole lives are about building security, yet being an artist is all about embracing your insecurities, which I think provides the framework needed,to let yourself play without pretenses and maybe make something.

WR: It strikes me that your life as an economist was always as a member of teams of researchers working together, and now your work as an artist appears to involve long stretches working alone.

I love the team-based part of my life as an economist in contrast with my mostly solitary work today. Two extremes, as if one could have different selves… Life does give us these opportunities, and it is up to us to care to take them.  I enjoy social situations, but I guess that I have mostly adapted to them.  My natural state is one of solitude.

WR: How do you structure your life and your work in order to be able to produce art in a way that is as free as possible from commercial considerations?

Having done economics before has certainly helped me to organize my financial life in such a way that I can devote everything to my art today, although of course for me that means a frugal lifestyle.  I sell some of my artwork, but not enough to make a living.

Yet lack of commercial success can be a disguised blessing for an artist. It pushes you to set priorities and gives you an artistic freedom that is harder and harder to come by today.  If you depend on money from your art in order to feed your children – if you need the collectors that buy your art, or even the curators and critics that write about your work and invite you to participate in their exhibitions, then that will always, in some way, put pressure on the kind of work you do.

Not so different from academia.  Once you are in a field within a given discipline, it is really hard to change.  Being financially independent at least takes some of the pressure off; an artist will nevertheless always seek some form of acceptance at the end of the day, and to be independent from the latter is the ultimate aim and the work of a lifetime.

WR: Who are your main artistic inspirations?  Is it OK if I confess to you that I see your work – in particular “Tétanisme”, as being somehow connected to the work of Gruenewald? 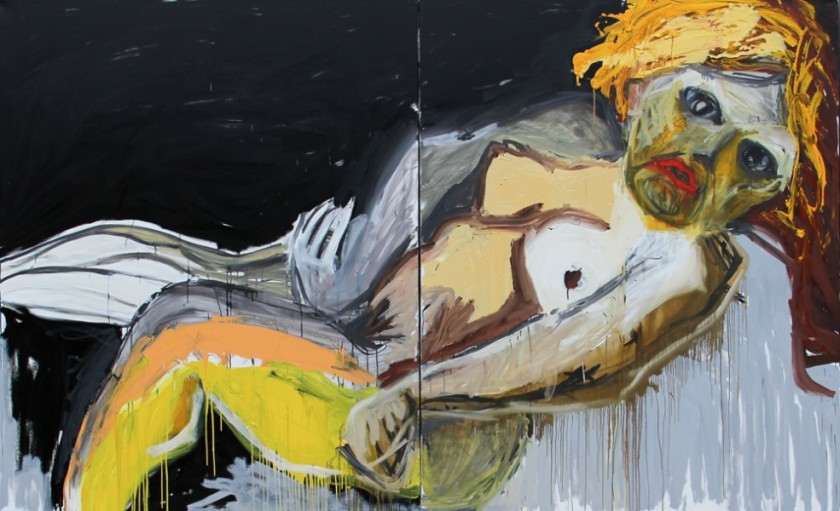 Well, Gruenewald is one of my favorite painters!  Along with El Greco.  I think this has to do with the fact that these artists were ultimately working from the soul.  It is a pity that this view is often disregarded today as romantic or old-fashioned by many in the art world.  I mean, these were extremely intelligent and analytical painters, but when it came to really wrapping up the work, they just let go and let that “something else” evolve and complete the painting.  Something beyond the rational, allowing for mystery, for what we cannot measure.  I think that is where humans beings are the most interesting and vast.

WR: Please tell me about your video work.  Your “brunehilde and siegfried” is hypnotic – it feels like a work that is deeply in conversation with great music, in particular when it comes to the establishment and resolution of tension in that work.  What was the genesis for that project?

Interesting you say that, because while painting is the main thing in my life as far as production, as far as consumption, music comes right at the top (well, along with bread, cheese and wine).   Music is fundamental to my life, I listen to all sorts of music, and I sing pretty much all the time –my voice is my lullaby rocking me out of my pains, but also my joie de vivre.

To me music and painting are so closely related to one another.  It was during a three-month residency in Leipzig, Germany, a time where the painting wasn’t going well, and I went on a spree making drawings. I put them up on the wall and saw some themes imposing themselves, in terms of color, and then it looked like some comics, a narrative of sorts that was screaming for animation.  I was vaguely inspired by the mythological figures of Brunhilde and Siegfried, always close to my heart, of course from books, films and music, but especially as my mother used to call my paternal grandmother Brunhilde, which was terribly pejorative in her view!  This was my chance to set the book straight.

WR: I think that some artwork and artistic production is the art of the intellect – cool, rational, maybe even cynical.  Other artwork is coming from the heart.  Which is more important to you, and how do these poles interact?

I think a truly significant piece of art requires both. But we are in a world that enjoys more talking about art than actually feeling it. I would say that art that really makes a difference as art -and not as philosophy or literature or else-, that transcends all times and cultures, from the early cave handprints to contemporary artistic expressions, happens when the artist stops interfering in the production of art with her mind!  To get rid of our biases, our intentions, our pretty ideas, to uncover something really truthful.

I mean, there is nothing new under the sun, we are just recycling old ideas.  But if we let them go through ourselves and let go in the process, the individual might become universal.  I think this is important because this is what distinguishes art that is just clever, amusing, or a diversion, from art that can actually change our lives.

Maybe I sound like a moron, but I guess it is like religion, say, you are a smart guy, you read Nietszche and you were convinced that god is dead, but if your guts tell you something else, you will still believe in god.  The mystery of god, the mystery of love, the mystery of the human soul.  And so with the mystery of great art.

WR: What have been your favorite exhibition experiences?

You mentioned earlier Gruenewald.  Probably one of the greatest aesthetic shocks of my life was when I was in front of his crucifixion of the Isenheim altarpiece in Colmar.  And actually, more than an exhibition, I would say a film, it was in Buenos Aires, when I was about twelve, and my paternal grandmother, a Lutheran pastor of Danish descent, took me to see “Fanny and Alexander” by Ingmar Bergman.  I did not understand the film then, I was even frightened, but I was fascinated with its mystery.  That started a life-long friendship between Bergman and I (only he never knew it).  Bergman is probably the person who, outside of my parents, has had the greatest influence on me.  That is what I mean by art changing your life: it changes the way you see things, so it changes you forever.

WR: What is the relationship between art and hope?  What development in today’s world fills you with the greatest amount of hope?

I think art comes from some sort of discomfort.  Yet if you have the courage to pick up the paintbrush, you are already out of the nadir.  Behind every artistic gesture there is always hope, an intention to establish contact, even for those artists who will not admit to it!  An artwork is like a prayer. One that you constantly have to work at.